Ahmed Hassan Wehlie: Combining a love for technology with peacebuilding

Creative director of IriseHub shares his story on why technology can play a key role in peacebuilding.

Mogadishu - Ahmed Hassan Wehlie has always had a technological bent.

He displayed his talent in this area early in life. At the age of 11, growing up in the Somali capital of Mogadishu, he would disassemble and reassemble the radio receiver in his family’s home, sometimes to the exasperation of his parents. At the same time, they would appreciate his skills when a lamp went off due to a technical fault.

Born in 1996, Mr. Wehlie ― also known as ‘Ahmed Jubba’ ― was one of ten siblings. His parents had no connection to the technology sector. His father is a radiographer, and his mother a homemaker.

This made little difference to the young Mr. Wehlie. As he got older, his enthusiasm for technology grew stronger and fused with a growing interest in helping his country.

In Grade 11 at Jaabit Bin Hayan School, he noticed motivation in his class was going down. When he asked himself why, he realised that everyone in his class was fighting over notepads ― the options available in the local market were of poor quality, thin and expensive.

Mr. Wehlie pondered the matter for some time before coming up with a solution involving his tech skills. 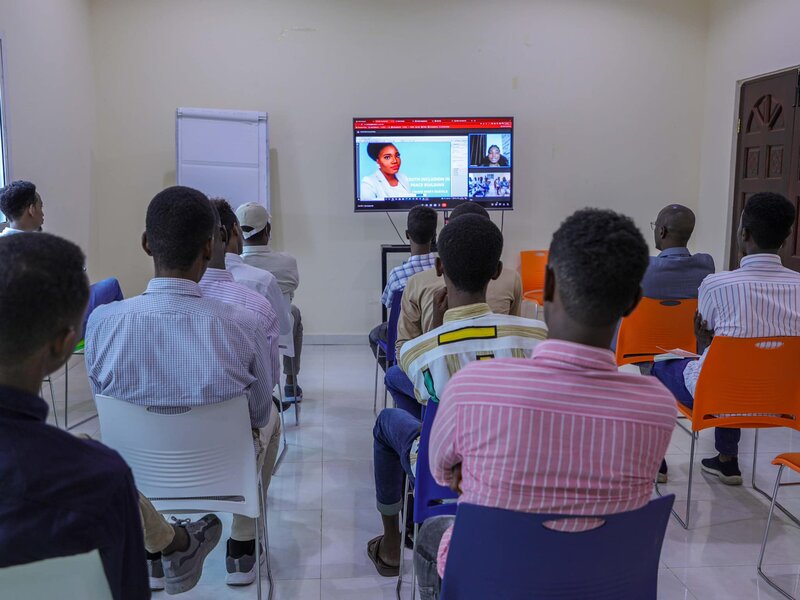 Using Photoshop, he designed a thick, durable notebook cover that could be personalised. He then offered this solution to his classmates who leapt at the chance to have hard-wearing notepads with their own names printed on them. His classmates sourced the needed paper, and Mr. Wehlie completed the designs using his home printer.

“I noticed that after everyone got a notebook with a similar design, my classmates felt more connected to each other and felt more like a group,” says Mr. Wehlie, when looking back on that event, which was his first experience in coming up with a solution through technology.

These steps combining tech and social harmony received a greater boost while he was in tertiary study.

In 2019, when he was 23 years old and studying for a bachelor’s degree in Information Technology from SIMAD University in Mogadishu, he had been on his way home from class when someone robbed him at gunpoint.

The mugger appeared to be younger than Mr. Wehlie.

“At that moment, I did not feel sorry for what I lost. Instead, I felt sorry for my country if boys of such a tender age need to wave a gun in someone’s face,” Mr. Wehlie recalls. “At that very moment, I decided I wanted to do something. I did not know what yet, but I knew I could not just graduate and focus on my life alone.”

The opportunity presented itself soon after his graduation in 2021.

While looking for employment, Mr. Wehlie was offered the position of creative director with iRise Mogadishu Innovation Hub, the first innovation hub and co-working space in Somalia. A team of like-minded individuals founded it in 2016 on the premise of helping transform Somalia into a ‘silicon valley’ in the Horn of Africa. Headquartered in Mogadishu, iRise provides a space for Somali innovators, techies and aspiring entrepreneurs to share skills and ideas, as well opportunities for financing and partnering.

After four months at iRise, Mr. Wehlie was promoted to communications team leader. 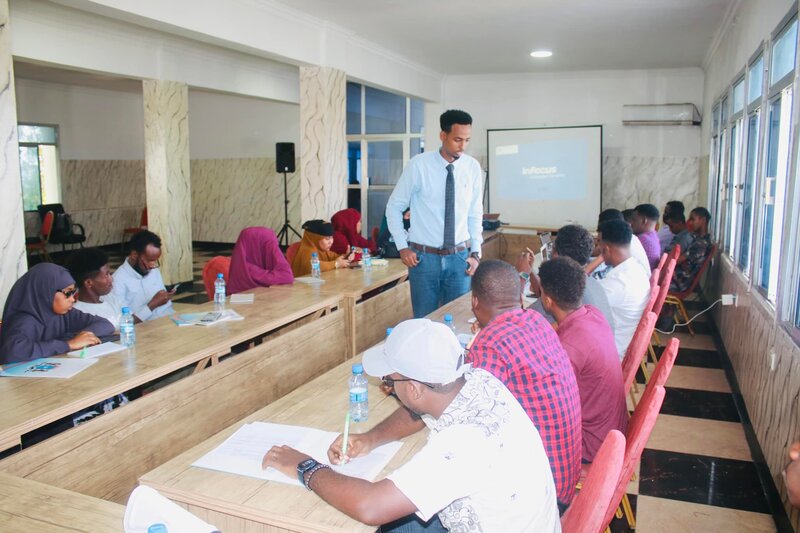 But Mr. Wehlie also wanted to add another dimension to his work. While in iRise’s offices, he frequently spoke about his dream of combining technological advances and education for the benefit of young Somalis to learn about subjects that were not part of official school curricula, such as how to sustain peace in Somalia through the application of technology and providing youth with mediation and negotiation skills.

His employers liked what they heard.

“The iRise team was receptive to my ideas and offered office space and their support for me to create a non-profit organisation. Initially, I brought one person on board, my friend Abdisalam Maalin, and established Galka Nabadda, a youth-led initiative promoting peacebuilding in Somalia through empowering and training youth from various backgrounds on mediation and negotiation skills,” says Mr. Wehlie.

“The root of our work is our dialogue with our ‘community’ on social media. They dictate the direction of Galka Nabadda’s work. We don’t use formal research, but we pose questions on social media and identify the areas of intervention based on the answers.

“So far, we have conducted a workshop on countering hate speech and the role of media in peacebuilding. We are about to start a workshop for artists on music for peace. All our interventions are conducted in person, and participants are selected through a call for applications based on well-defined criteria. There are no nominations for our workshops,” Mr. Wehlie adds.

He is encouraged by the early feedback from participants in the ‘role of media in peacebuilding’ workshop.

According to him, “In Somalia, most of the media workers are young. Often the journalists double as editors and have a say about the news agenda in their organisations. Those working with us attempt to include more news on constructive developments in the headlines to change the predominantly gloomy narratives.”

The young social entrepreneur highlights that the workshops are not an end in themselves. There is a ‘community officer’ at Galka Nabadda, a person designated to maintain networks or communities created through the workshops. This way, the participants continue sharing experiences and content where they have applied the new skills.

“We want to create a community where everyone knows the importance of peace. We plan to train and empower young people in schools and universities across Somalia on topics they don’t see much in classes, such as peace-building, negotiation tools and reconciliations,” says Mr. Wehlie, who runs the non-profit group while also holding his regular job at iRise.

Galka Nabadda is now operated by five staff and four volunteers in Mogadishu; it doesn’t have regular funding and is supported by iRise and other enthusiasts of empowering young Somalis. Mr. Wehlie hopes to expand its reach beyond the capital and become more diverse in the composition of its membership, which is currently made up of four women and five men. 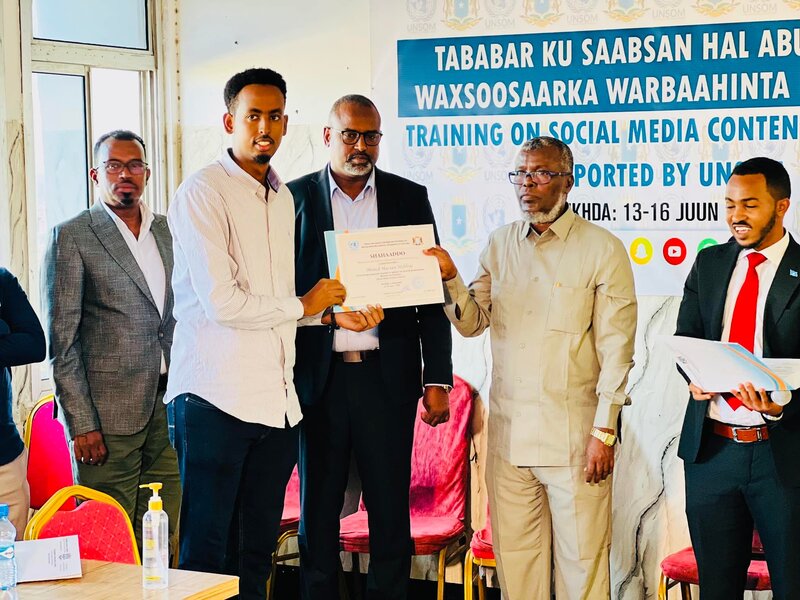 Somalia is one of the youngest countries in the world, with more than 4.6 million people between the ages of 15 and 35.

Improving young people’s lives and enabling their active role in society ― online and offline ― is crucial to building sustainable peace and development in Somalia. Furthermore, young people are important drivers of change and accountability to advance the commitments of governments and the UN to the Sustainable Development Goals (SDGs) and the global Youth, Peace and Security Agenda (YPS).

The SDGs are a universal call to action to end poverty, protect the planet and improve the lives and prospects of everyone everywhere, and were adopted by all UN Member States in 2015 as part of the 2030 Agenda, which sets out a 15-year plan to achieve the SDGs. The YPS Agenda was adopted by the UN Security Council in 2015 and calls on all actors to strengthen young people’s role and ensure their participation and protection in conflict resolution, peacebuilding and decision-making.

International Youth Day is celebrated every year on 12 August. This year’s theme is ‘Intergenerational Solidarity: Creating a World for All Ages.’

Read more about the UN’s work on Youth Empowerment in Somalia here.