Yelling, whistling, children throwing rocks at their animals in a queue sun-up to sun-down - this is the future of water. Climate change has brought about four seasons of drought in Somalia, with around 3.5 million people facing acute water shortages in 2022. Climate resilient boreholes run by solar power and managed by the community provide a more sustainable intervention.

“My family has been here for generations, the town is named after us, but in 2017 we had to leave in search of water. Many left. At the first sign of rain, we moved back. It was one year. There was water trucking then, but it was a lot of money,” says Haji, a respected elder.

The community used to get predictable rainwater from catchment pods, but they dried up and were dangerous as people and livestock would fall in them. Up to 2021, Haji Khair, in Puntland, was prone to displacement due to lack of water but now around 18,000 people and 3,000 children and their livestock have sustainable water with UNICEF's climate resilient borehole, whose construction was supported by the UK Government. 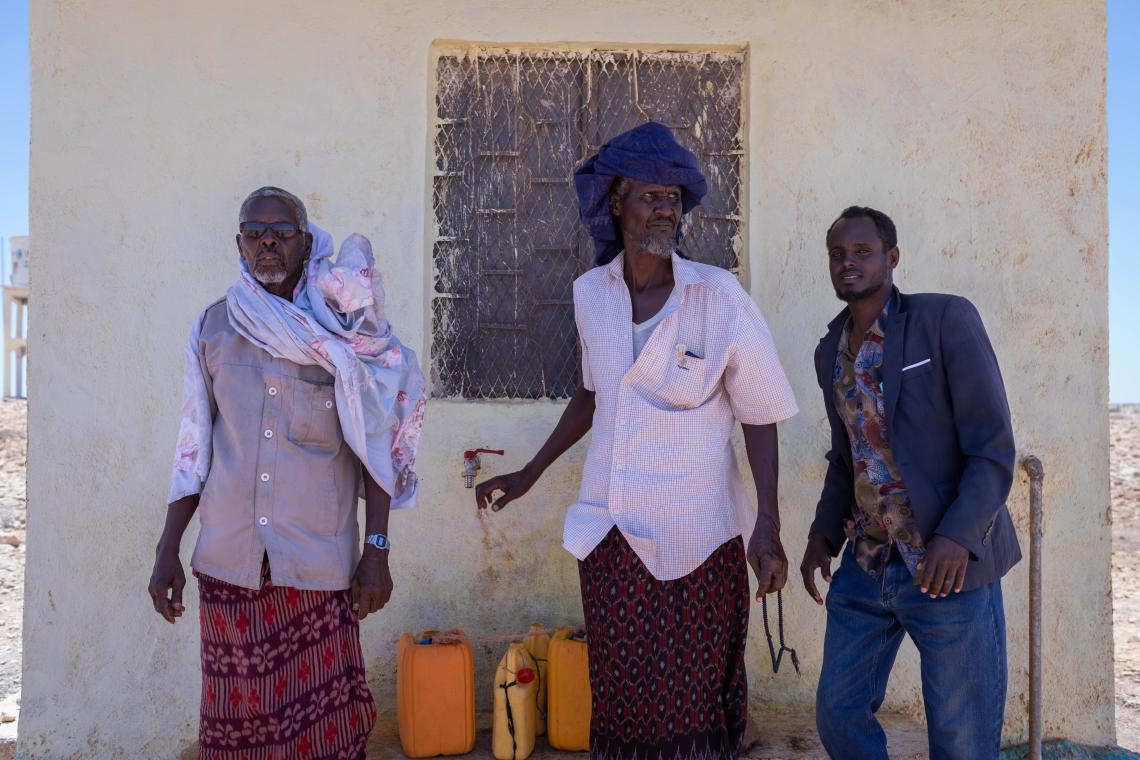 As drilling of a 400m deep borehole began and solar panels were installed, the people were very unsure that water would come. “We waited and waited. When the water came out it was really a fantastic moment here,” says elder Suliman Farah, with a grand gesture. “We can’t count the benefits; there’s children, us, animals, nearby villages and the pastoralists all coming for this water. The animals are healthy, the children have energy.” A water tank towers overhead, holding 50,000 liters of water, along with two animal troughs and a water kiosk. The nearby water pump is run by solar energy and has a second water kiosk for the community. When the rain does come, the site is flood resilient.

“This borehole is like an oasis in the huge desert with no water,” says Abdirizak Yusuf. He is a pastoralist monitoring the families’ 230 goats, sheep and camels as they queue at the water hole specifically for animals. “Before this waterhole, my family could only stay in this area for two months and then have to move because of no rain and the children were weak. Now that there is water, my whole family can stay close by.” His family has even acquired a water bladder so that they can sell water to other pastoralists further out in the desert. “In December, this borehole came here. Without it my animals and maybe even my children would have died. We rely on the animals. We sell them, we use their milk and meat. My children’s future is with them.” 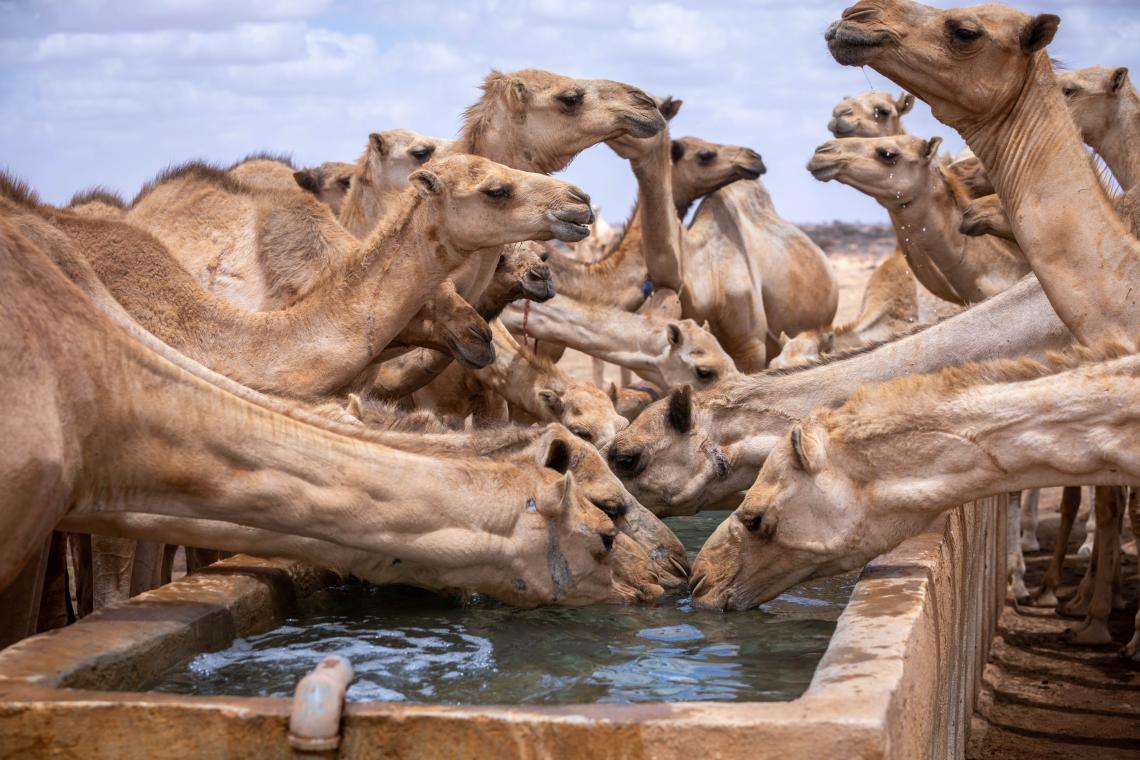 Pastoralists children's future is based on the health of their livestock. This new borehole supplies two animal kiosks.

“We used to walk too far, now it’s better,” says Sundus, Abdirizak’s 15-year-old niece, as she shepherds the goats.

The UK supported water, sanitation and hygiene project consists of six boreholes with solar pumping systems across Somalia, including Puntland state. They are sustainable and improve the ability of people and systems to anticipate, adapt to and recover from the negative effects of climate change.

Constant water provides economic stability to the community and for the pastoralists by keeping their livestock healthy. The new borehole taps into a deep aquifer with potential of being a continuous source of water. A water truck can fill up here for only US$10 and a herd of camels can drink for US$4. At a village nearby, without a climate resilient water source, it costs up to US$150 for a water truck and US$20 for camels to drink. The borehole and all parts of the water system are maintained under the community Water Management Committee. The money collected is used for maintenance of the water system, spare parts, and security. 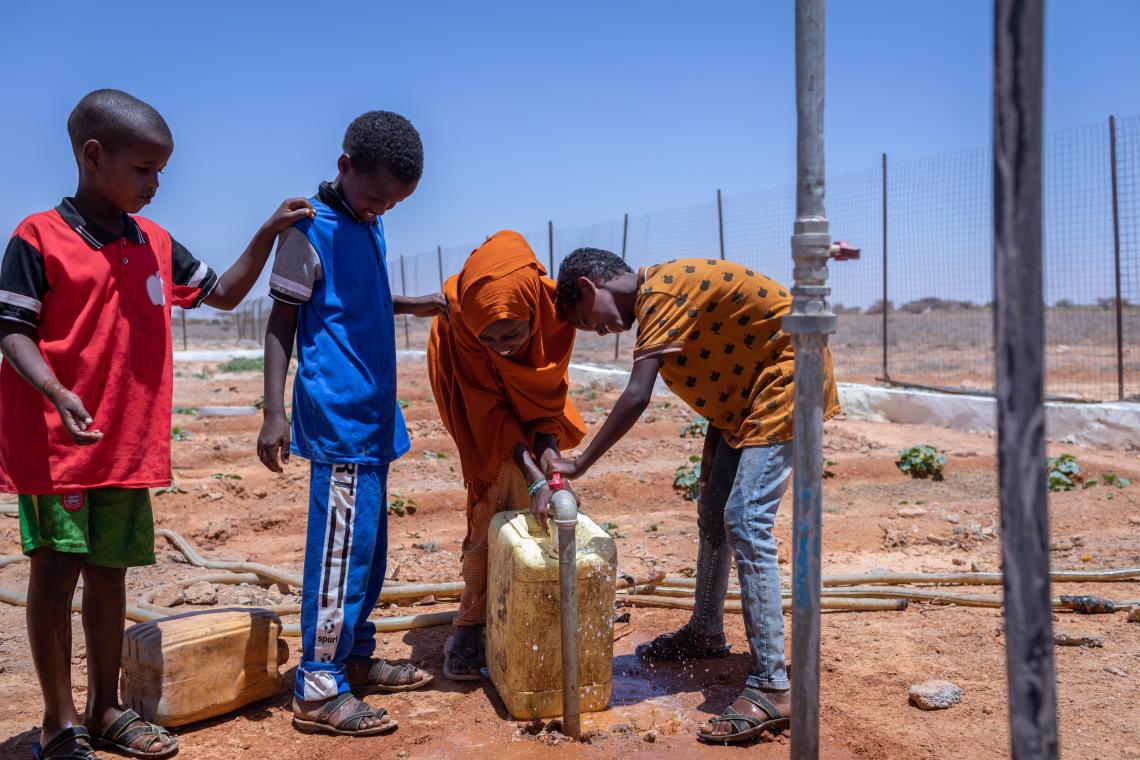 Children from Haji Khair are fetching clean water that is close enough to home that they don't miss school.

“Even the hyenas come here to drink in the night,” chuckles the Chief of Haji Khair, Mahad Ali. “In the past there were conflicts over scarce water. Now, my community is at peace, and I see them united around the water.”

With support from The Foreign, Commonwealth & Development Office of the UK Government, UNICEF and partners constructed six boreholes with solar pumping systems and six water points with sustainable operation, maintenance, and management systems to ensure a total of 30,000 people affected by floods and drought receive access to clean and sustainable water in Hirshabelle, Puntland and Somaliland.