UN: As impact of drought worsens, growing risk of famine in Somalia

The United Nations and its implementing partners have been heavily engaged in providing humanitarian support.

Luuq/Mogadishu – Standing in front of his makeshift home in a camp for internally displaced people (IDP) in southern Somalia’s Luuq district, Ahmad Hassan Yarrow looks out towards what remains of the Juba River and shakes his head forlornly.

“Of all the droughts I have experienced in my 70 years, I have not seen anything as severe as this,” he says as he contemplates the scenery before him.

Mr. Yarrow is one of hundreds of thousands of Somalis displaced by the country’s most recent and worsening drought, leaving their homes in the search for food, water and shelter.

The Luuq district, located in the Federal Member State of Jubaland’s Gedo region, is intersected by the Juba River. For more than three months now, the river’s waters have steadily dwindled, leaving only brown puddles.

As the waters evaporated, so did the hopes of local communities – made up mainly of farmers and pastoralists – which rely on the river for their livelihoods. Under a searing sun, their crops wilted and their livestock died, and, like many other Somalis around the country, the communities came a step closer to starvation.

“We lost everything in the drought,” says Salado Madeer Mursaal, a 28-year-old mother of one, who has also sought help at the IDP camp. “We need food, shelter, water and other basic human needs.” 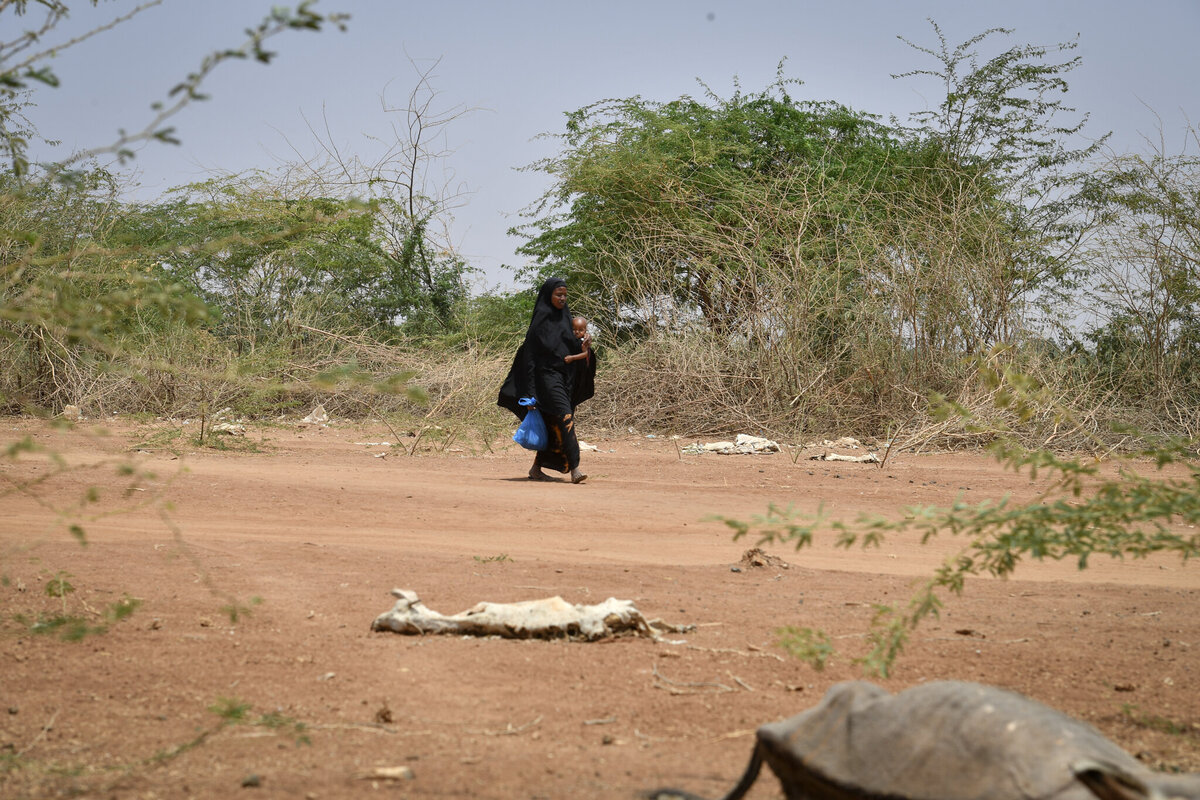 With decades of conflict, recurrent climate shocks and disease outbreaks, including the impacts of the COVID-19 pandemic, the humanitarian situation in Somalia was already grave. Even before the current drought, an estimated 7.7 million Somalis were in need of humanitarian assistance and protection this year – up 30 per cent from a year ago.

The situation has deteriorated, with the current drought wiping out crop harvests and  livestock dying due to a lack of water and pasture, depriving many pastoral communities of their only source of income.

“The country has seen three consecutive failed rainy seasons. The fourth, which is supposed to start in April and continue through June, is also projected to be below average. If that happens, then we are looking at a risk of famine,” says the Humanitarian Coordinator for Somalia, Adam Abdelmoula.

The United Nations and its implementing partners have been heavily engaged in providing humanitarian support. In February, they collectively reached 1.6 million people with assistance, but, with Somalia's federal authorities, they are calling for more funds to provide urgent humanitarian assistance.

According to the UN Office for the Coordination of Humanitarian Affairs (OCHA), Somalia is currently one of the most severely drought-impacted country in the Horn of Africa. Some 4.5 million Somalis are directly affected by the drought, and about 700,000 people have been displaced. 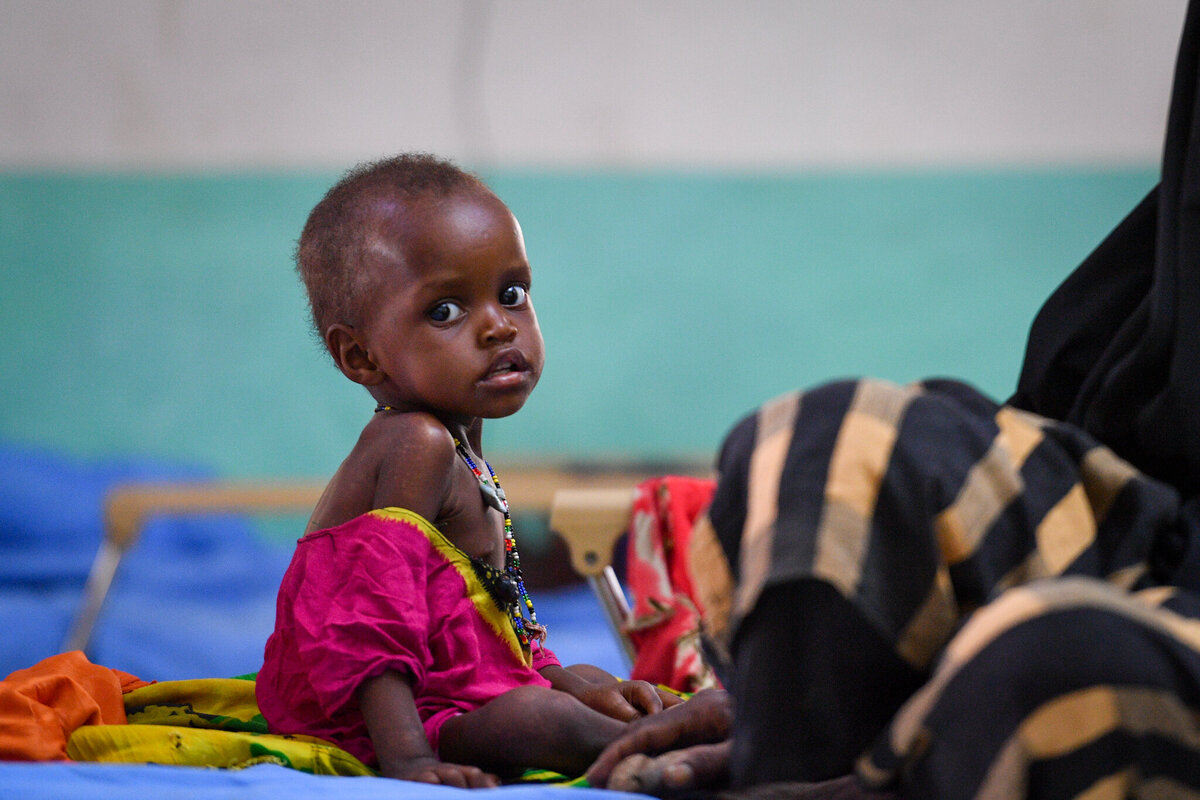 Children are in an especially vulnerable position.

"As we speak now, 1.4 million children under five years of age are severely malnourished, and if we don’t step up our intervention, it is projected that 330,000 of them will be on the brink of death from severe acute malnutrition. The situation cannot be more dire than that,” says Mr. Abdelmoula, who also serves as the UN Secretary-General’s Deputy Special Representative for Somalia and the UN Resident Coordinator.

“So I call on all those who are able to contribute, including the Somali diaspora, the business community, the traditional and non-traditional donors, everyone, to act and to act now,” he adds.

In the 2022 Somalia Humanitarian Response Plan, the United Nations seeks nearly $1.5 billion to provide humanitarian assistance to 5.5 million of the country’s most vulnerable people, including 1.6 million IDPs, 3.9 million non-IDPs, and people with disabilities. 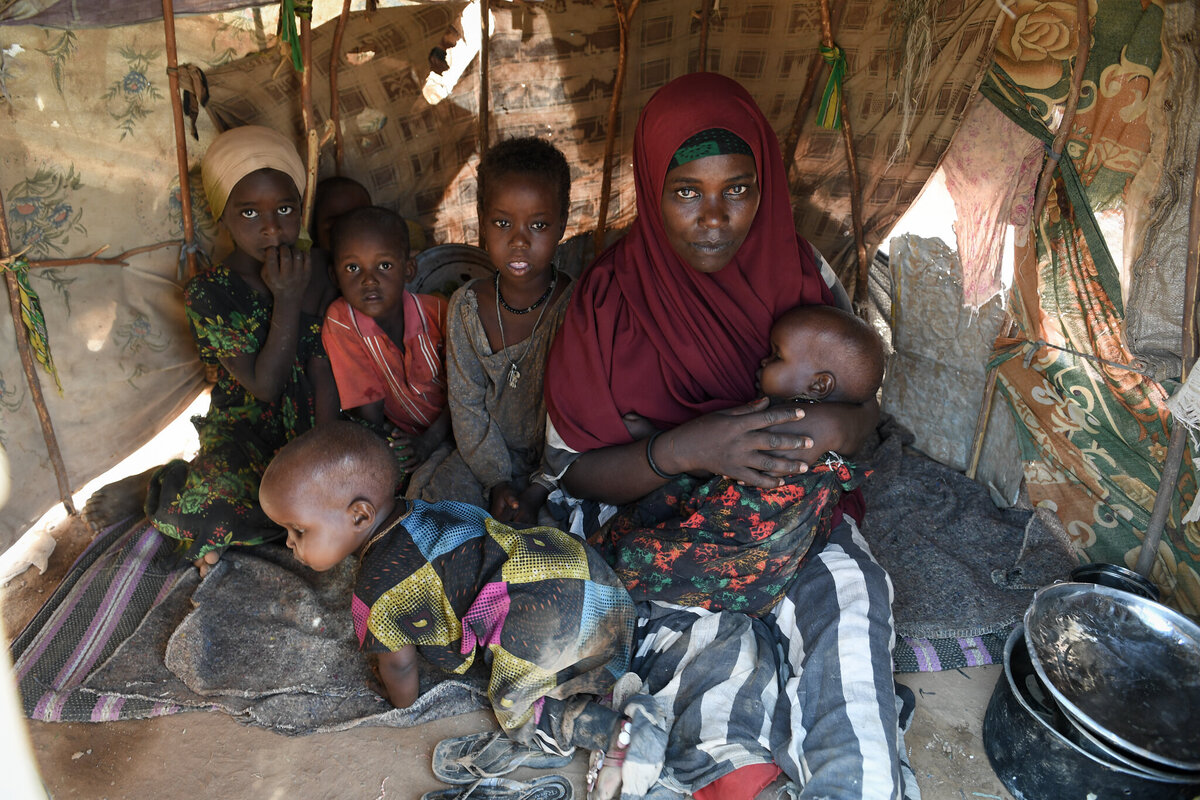 In Luuq’s camps, there is a palpable mix of relief and resignation among the displaced.

After walking for several days, Fatuma Madeer Mursaal and her family arrived at the Boyle IDP camp in Luuq. There, they joined the more than 4,000 people seeking aid.

“We are farmers and we also had our livestock but all animals died in the drought. We have nothing left and we have come here for water, food, shelter and help,” says Ms. Mursaal, a 39-year-old mother of six.

The Boyle IDP camp is one of several camps which have sprung up around the country as desperate people move to locations where they hope they can access help.

“It’s serious, and one of the biggest tragedies Somalia is facing today. The displaced communities have no shelter, water, medicine, or even food, and they depend on handouts. The drought has wiped out everything, and if the survivors don’t get urgent humanitarian assistance, they are likely to also die,” says the Luuq district’s local administrator, Commissioner Ali Kadiye Mohamed. 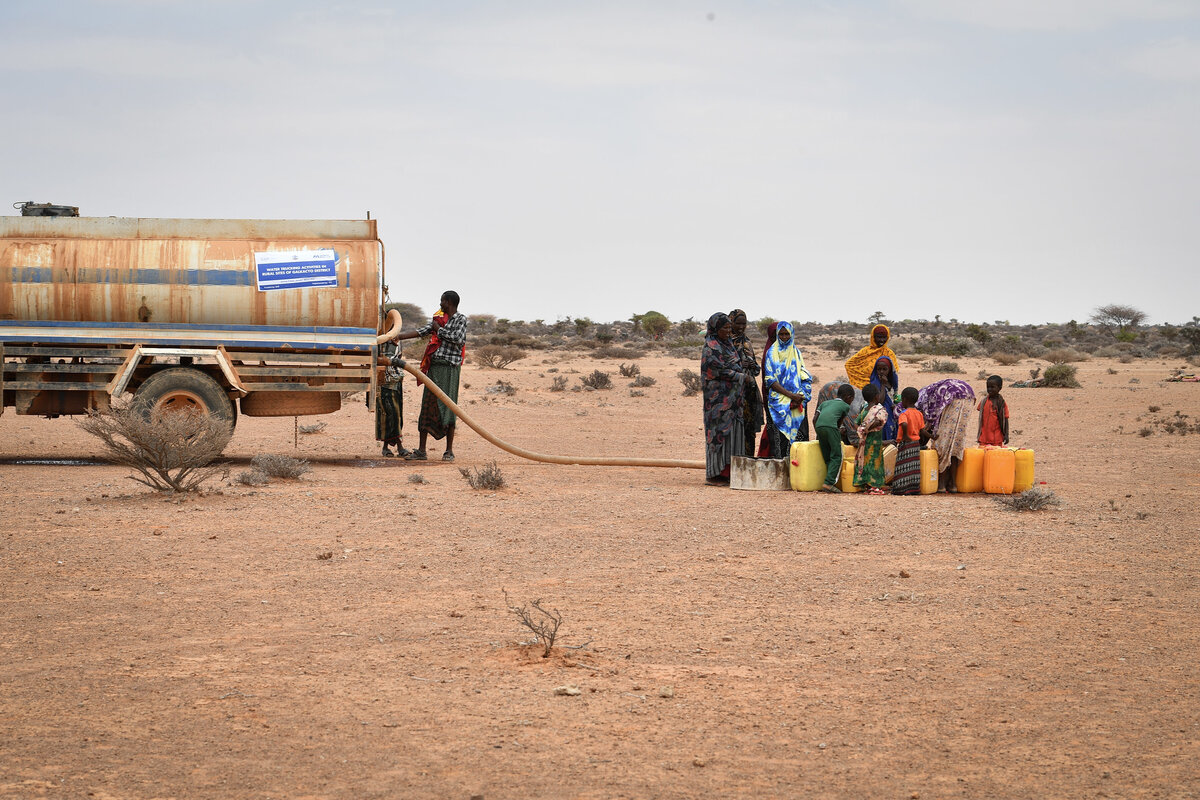 UN humanitarian agencies are working closely with implementing partners on the ground to alleviate the situation.

The International Organization for Migration (IOM) has been trucking water into camps such as the Boyle IDP camp, as well as constructing water tanks and pit latrines to help improve sanitation conditions.

At the Luuq District Hospital, funded in part by the UN Children’s Fund (UNICEF), the UN agency is working with an Irish charity agency, Trocaire, to treat, feed and stabilize children admitted with severe malnutrition. Local staff say they have seen a worsening of the situation. 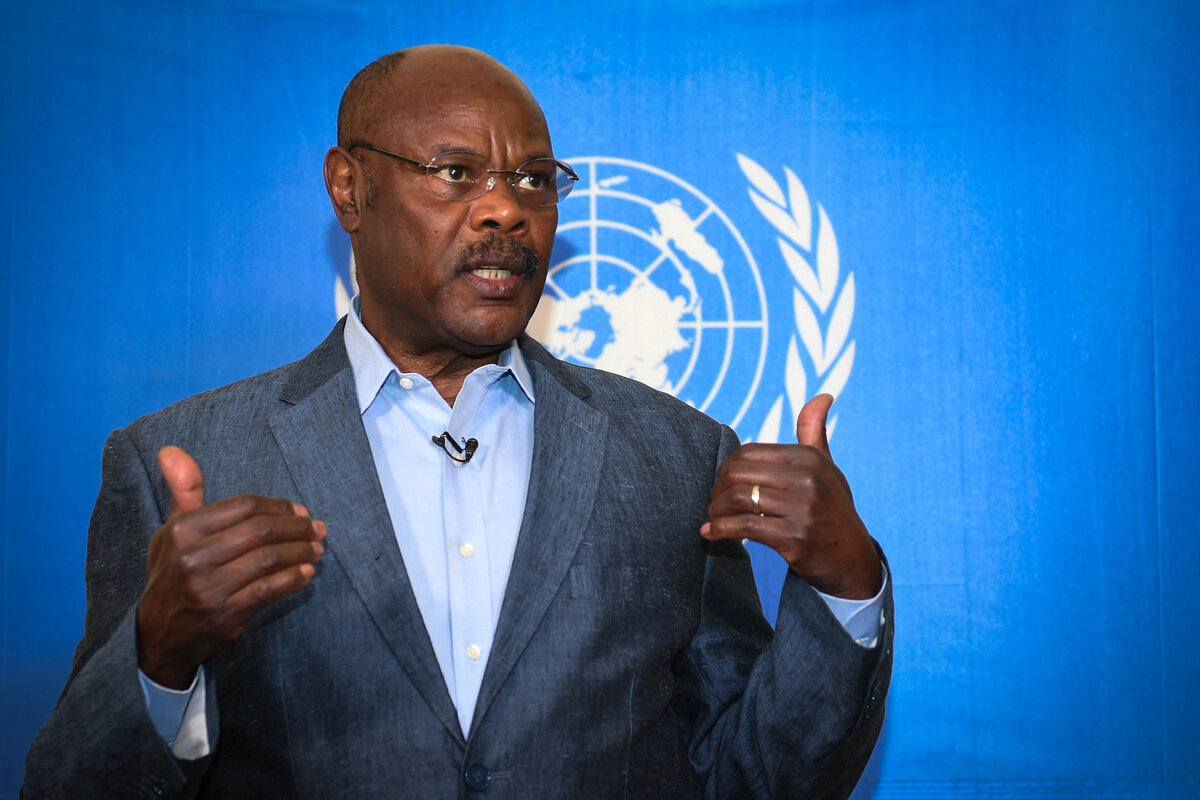 “In January, 62 malnourished children were admitted here. In February, the number rose to 100, and as of 21 March, the number stands at 114,” said the hospital’s chief nurse, Abdirahman Mohamed Kasim.

“As soon as these children get to the hospital,” he continues, “we give them milk for primary and secondary stages of malnutrition, and, after their recovery, we transfer them to other feeding centres where they receive high energy biscuits and treatments for any further illnesses.”

Elsewhere in Luuq, the UN World Food Programme (WFP) is implementing cash and food voucher programmes for vulnerable groups, and providing preventative and curative nutrition support to women and children. The agency is scaling up its interventions, aiming to support 2.5 million people across Somalia with food and nutrition relief in the first half of this year, but – like so many other UN agencies – it can only do so if it receives more funding; in this instance, some $203 million to close a funding gap. 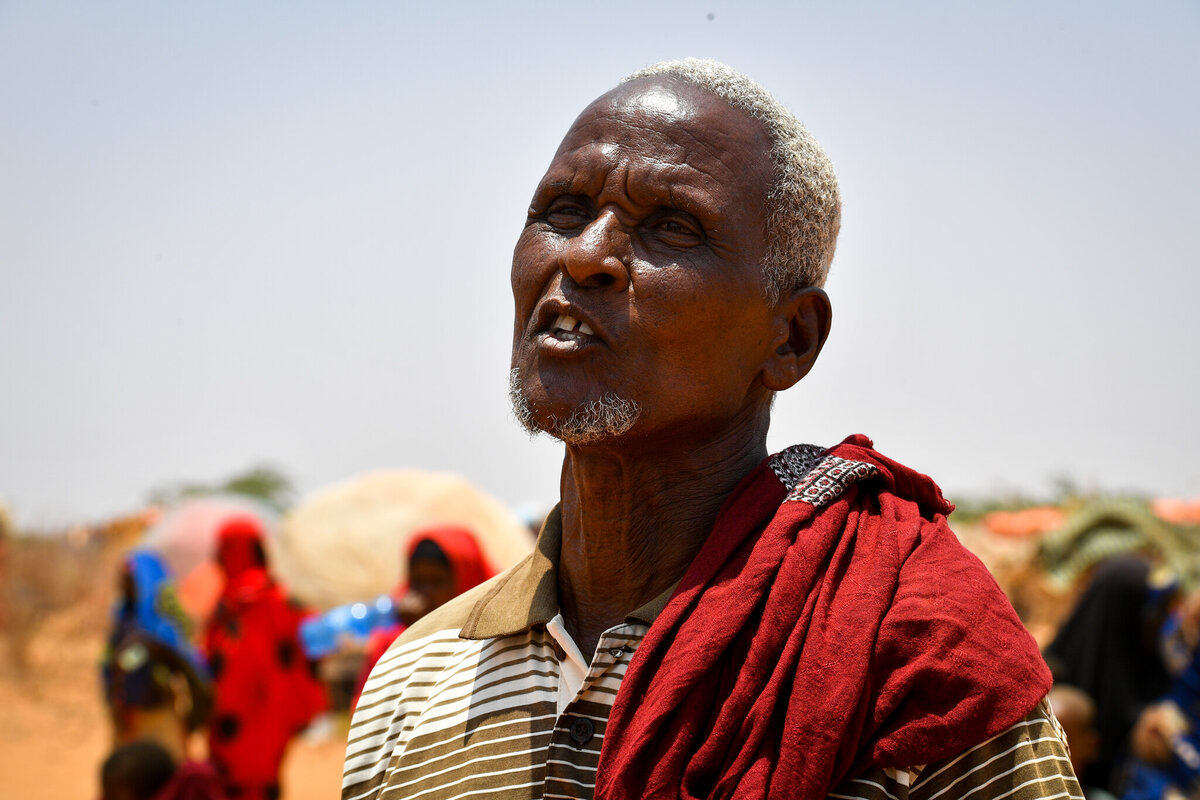 For Mr. Yarrow, looking out from his home in the IDP camp in Luuq, the issues of funding of the country’s humanitarian response are remote, academic issues, far from his concerns. His needs, and those of the many other displaced Somalis facing starvation, are more immediate.

"This drought has wiped out everything we had," he says. “We are relieved to be here at this IDP camp where we are getting assistance but there are too many of us, and we are struggling. The food, water and shelter are not enough. There are many women, the old and children who are malnourished and sick, but have no medicine. We are doing our best to survive, but we need help.”

UN support for drought response as of 25 March 2022

OCHA
United Nations Office for the Coordination of Humanitarian Affairs