In Somaliland, desperate families are migrating in droves in search of food, water, and pasture for their weakened animals.

Burao, Somaliland: At Nabad iyo Nasiimo camp for Internally Displaced People (IDP) just outside Burao town, Ayan Hersi watches forlornly as her in-law, Abdi Igge, sets sticks in holes he has dug and interweaves them with a secondhand plastic sheet to create a makeshift shelter.

Hersi and her two-children arrived at the camp in the dead of night from Fadihume, 100 kilometers away. She is the latest among 300 families that have been displaced by drought in the last three months and have found refuge at the camp.

“We arrived at three o’clock in the morning by truck. I have four children, but I had to leave two behind with their father and came with the youngest ones, aged three and one. Our family had 220 goats, but they all perished, and I arrived with two female goats that managed to survive,” she says.

The IDP camp currently has 20,000 people and the numbers are swelling. It was established in 2017 by families displaced by drought that year. Current conditions echo those of 2017 when a devastating drought swept through this region, decimating livestock, and triggering a mass exodus of people from rural areas to urban centers in search of food and water.

According to Amina Ahmed, the camp’s village committee member who has been working with local and international agencies to document the arrivals, eight to ten families have been arriving at the camp every day.

“The new arrivals are from areas that are hundreds of kilometers away, like Elafweyn in Sanaag region, Kirir and Higlo villages, and Beledhig village which is on the Ethiopian border. Their concerns are the same - lack of water and food because of the drought. Animals are dying. Some people come with nothing at all. They need shelter, food and utensils to start a new life,” she says.

A recent interagency drought assessment reveals that affected families living in the eastern regions of Toghdeer, Sool and Sanag are grappling with severe water shortages and loss of the livestock that for decades has been the mainstay of local communities.

The report further shows that rainfall levels in the past three years have been dwindling, resulting in these regions being among the driest in the Horn of Africa.

As Hersi tries to help with the building of her shack, Asiya, her three-year-old daughter, clutches her cloth and repeatedly cries for water. Hersi looks at her daughter helplessly and, with teary eyes, says she has none left. It’s been days since the camp last received water.

“We finished the little drinking water we carried, on the way. We have none left and I’m told this camp also has no water.”

Hersi has other concerns too.

“Late last night, we were hearing sounds of scavenging hyenas as we stay near a dumpsite. I feared for myself and my children,” she says.

In eastern Somaliland, the epicenter of the drought, desperate families are migrating in droves in search of food, water, and pasture for their weakened animals, adding to the estimated 600,000 people who were already displaced by previous droughts and floods across Somaliland. Women and children on the move are vulnerable to malnutrition, disease outbreaks, and sexual violence and exploitation. In the 2011 famine, the majority of deaths occurred among people who had fled their homes. 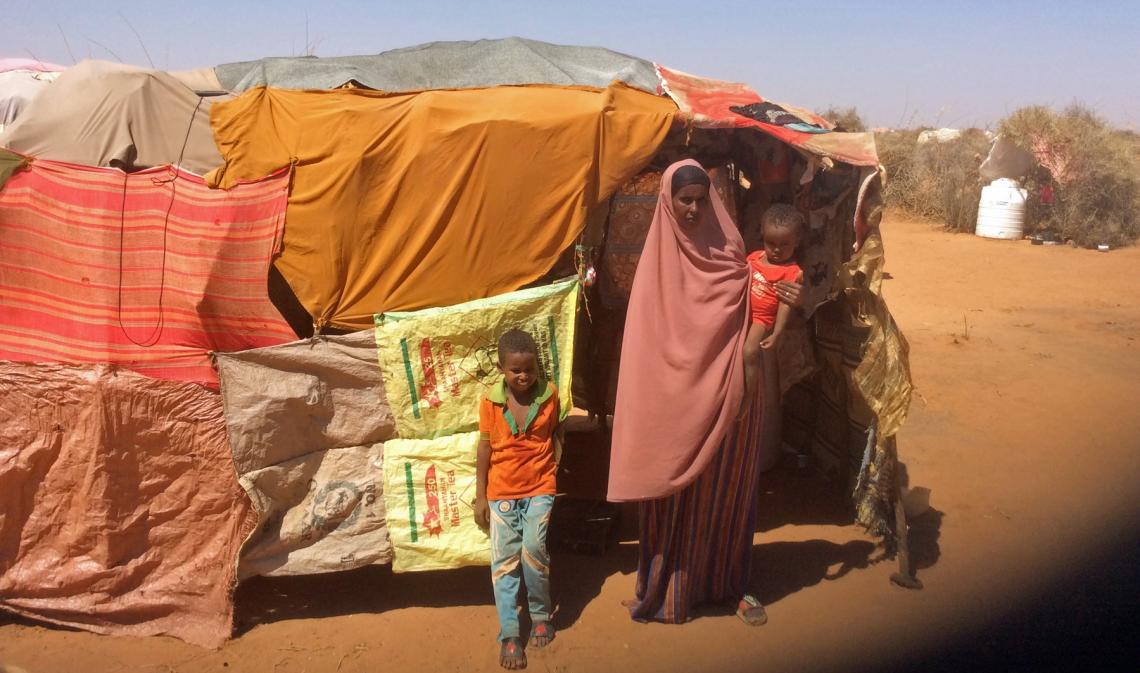 Asha Hussein and her children in front of her makeshift shelter.

Not far from the camp, Asha Hussein lives in a tin shack together with her four children. She was displaced from Galool Madobe village, 150 kilometers south-east of Burao town.

“I left Galool Madobe village a month ago after the drought killed 190 of our goats. It became very hard to survive and the 10 remaining goats were weak and on the verge of dying. We made a choice to save our children and ourselves. I left with the children and my husband stayed behind to eke out a living through selling of charcoal,” she says.

Hussein is grappling with tough conditions at the camp. Although she has built a temporary shelter, she lacks basics needs like food and water and is forced to send her two adolescent daughters to draw water from a borehole located 15 kilometers away. Her meagre sustenance currently comes from small amounts of cash sent by her husband.

“Everyday, I’m anxious about what to give to my children. I am also worried for their safety on the daily trek to fetch water. I am told there have been instances of attacks on girls and women as they fetch water and firewood.”

In mid-January, authorities in Somaliland, through the National Drought Committee, formally declared a drought. About 800,000 people have been affected, most of who live in areas that traditionally lack adequate access to basic services like water, health and nutrition.

To scale up its response in Somaliland, UNICEF requires US$3.3 million to truck water to distressed locations like IDP camps, repair existing boreholes, drill and install new boreholes, and complete the solarization of boreholes in eight locations.

Link to the original piece.