The 2020 Gu’ rains (April-June) have intensified across Somalia, triggering flash flooding in South West State, Jubaland, Bandir, Puntland and Somaliland from 20-23 April. As water levels rise in rivers, there are reports of riverine flooding in Jubaland. FAO’s Somalia Water and Land Information Management (SWALIM) reported that heavy were observed in Somaliland where some stations received a total of more than 100mm in a single day on 21 April. Heavy rains were also received within the Juba river basin on 23 April. SWALIM forecasts increased rainfall activity in most areas in Somalia and in the Ethiopian highlands in the coming week, which is likely to keep the water levels high in the Shabelle and Juba rivers.

The flooding has started barely four months after heavy Deyr (October-December) rains inundated parts of Somalia, affecting over half a million people; and as the country works to contain the COVID-19 virus, which is exponentially rising and has already infected several hundreds of people. The country is also working to contain a desert locust infestation.

So far, the floods affected various states and regions in different ways, as detailed below.

South West State: The most devastatedly affected State, where from 20 - 22 April, heavy rains in Baidoa caused flooding in the town and in 73 IDP sites that host more than 55,000 households. CCCM partners have mobilized responses in the most affected IDP sites are in Baidoa. The flash floods have also affected Berdale, Qansax Dheele and Dinsoor districts where no impact has been reported. SWALIM projects more heavy rains in Bay region, South West State, with a high risk of flash flooding.

Jubaland: Heavy rains have affected Gedo, Lower and Middle Juba regions. The levels of river Juba in Bardheere town have surpassed the moderate flood risk level and flooding has been reported in the area. Bardheere was one of the most affected areas by the Deyr floods in 2019. On 23 April, flash floods were reported in Doolow district. The river level at Luuq is 0.50m away from the moderate flood risk level. In the entire Juba riverine area, the water levels are very high and expected to continue rising. A high risk of flooding is expected.

Somaliland: The Ministry of Agriculture Development reported most areas received heavy rain of more than 50mm from 20-21 April. A particularly high amount of rainfall was recoded in Lughaya (114 mm) and Zeylac (108 mm) towns in Awdal region, as well as Buhoodle (108 mm) and Balidhig (90 mm) villages in Togdheer region. Other areas with moderate rains include Hargeisa, Gabiley, Wajaale, Qulujed, Garbodadar and Gerisa.

Puntland: On 23 April, The Humanitarian Affairs and Disaster Management Agency in Puntland reported flash floods and moderate rainfall in the eastern, coastal areas and Adduun/Deeh livelihood zones. The forecast indicates the rains may continue in the coming days.

Banadir: Heavy rains caused flash floods in many parts of Mogadishu on 20 April. The night rains affected about 720 IDPs in Siigaale IDP settlement in Hodan district. The affected IDPs were forced out of their homes which were completely submerged and damaged by the floods, to high grounds in Siigaale and Taleeh neighborhoods.

Hirshabelle: As of 23 April, water levels in the Shabelle river in Belet Weyne were 2.10 meters which is still safe from the moderate risk level of 6.50 meters and high-risk level of 7.30 meters. However, this week’s forecast in the area and continued heavy rains in the Ethiopian highlands where the river originates could cause a quick rise in the water levels. In Jowhar, it can flood any time since the river is shallow and has potential for gravity irrigation.

Galmudug: Heavy rains were reported in Dhuusamareeb on 23 April while several other districts in Galmudug received light rains over the last two days including Ceel Dheer, Cadaado, Cabudwaaq, Balanbale, Guri Ceel, Hobyo, and Xaradheere districts. The forecast for the coming seven days indicates an increase of rains, which could lead to an increase in river flow and the risk of flooding. 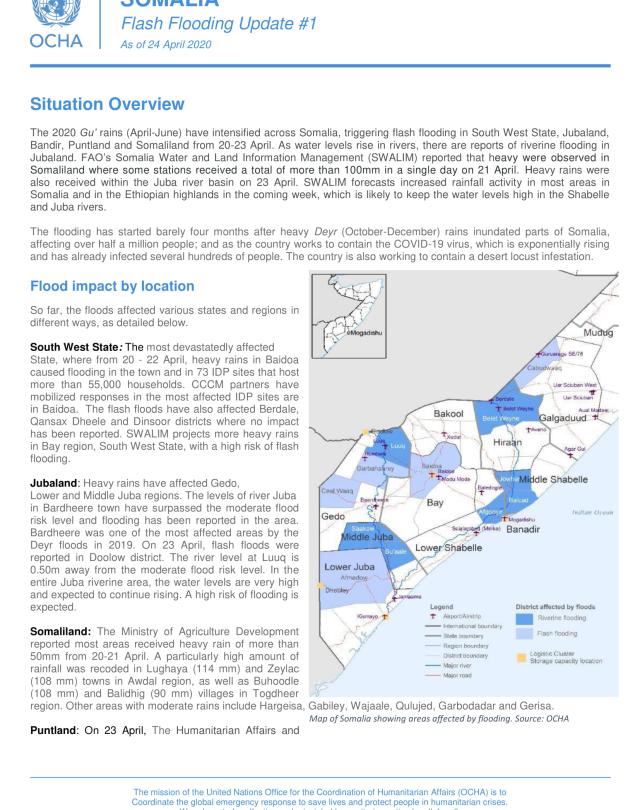 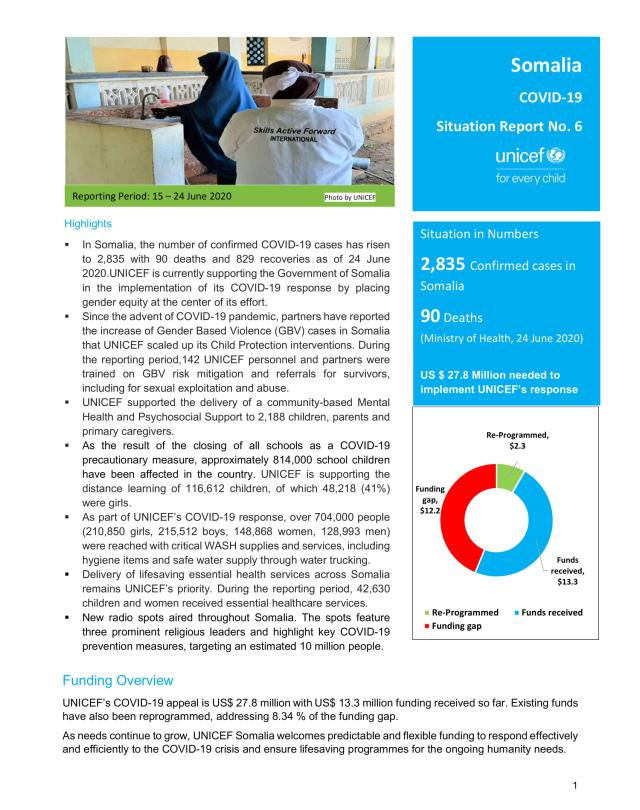 Snapshot of current needs and response 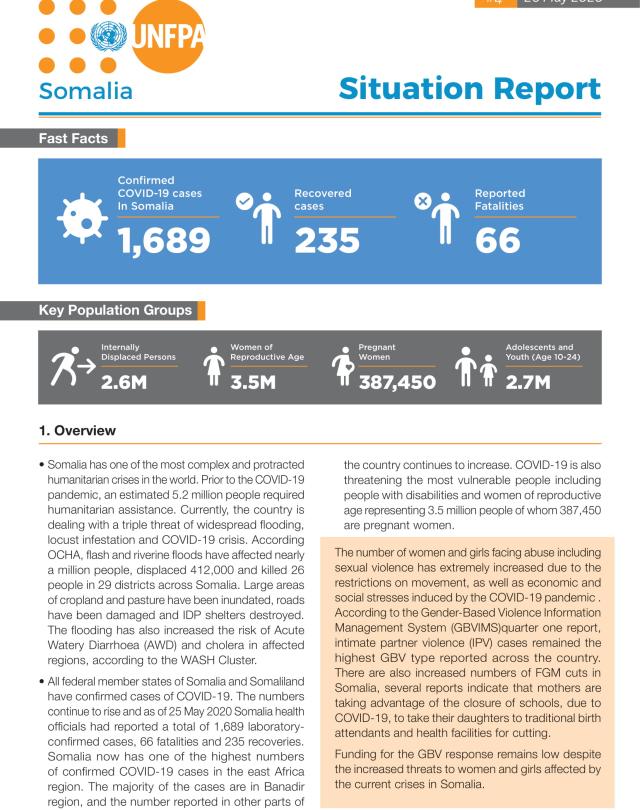 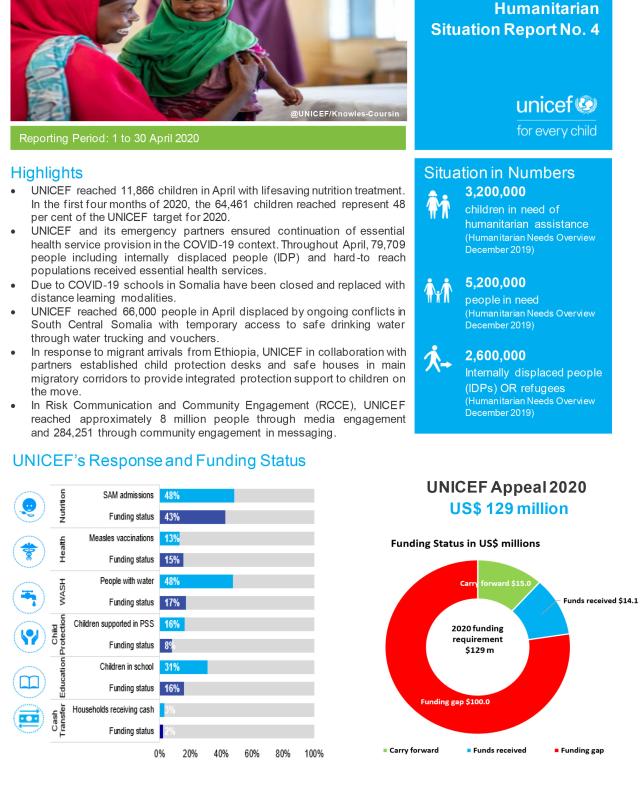 Monthly snapshot of current needs and response - concise operational documents to support the coordination of the humanitarian response.