On UN Day, Senior Officials from the UN underscore its commitment and close collaboration in supporting the country’s people and government.

Mogadishu – In observance of United Nations Day this year, the world body’s top officials in Somalia took the opportunity to underscore its commitment and close collaboration in supporting the country’s people and government in a range of strategic areas.

“As we see around the world, and here in Somalia as well, the values and the significance of the United Nations have never been more important,” the UN Secretary-General’s Special Representative for Somalia, James Swan, said at a virtual press conference in Mogadishu.

“Our strategy is codified in the UN Sustainable Development Cooperation Framework (UNCF) for Somalia. This document is fully aligned with and, indeed, signed by the Somali government,” he continued. “This document matches up to the National Development Plan of the Somali government so everything that the United Nations is doing here in Somalia is intended to support and advance objectives that have already been identified by Somalia’s leaders.” 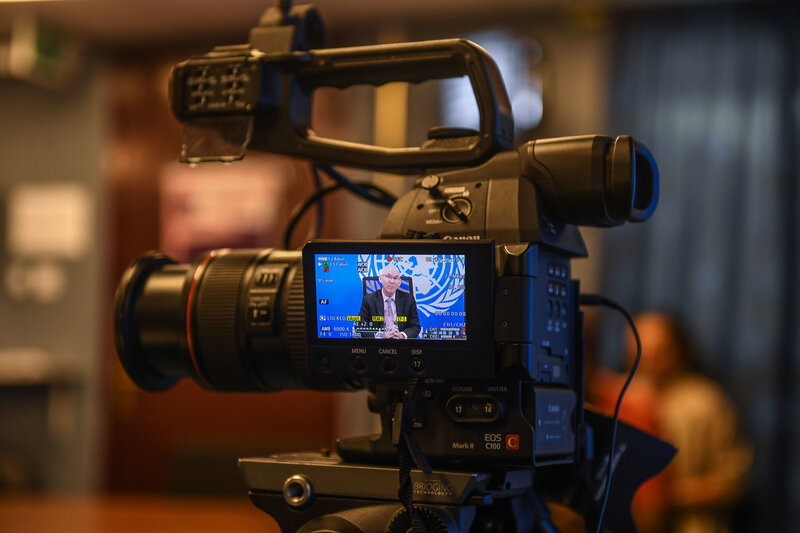 The senior-most UN official for Somalia was addressing the media two days after UN Day, which is observed annually on 24 October.

In 1945, representatives of 50 countries met in San Francisco, in the United States of America, at the UN Conference on International Organisation to draw up the UN Charter, the founding document of the United Nations.

The UN Charter was signed on 26 June 1945 and came into force on 24 October that year, when a majority of signatories ratified it, officially bringing the UN into existence. Since its founding, the UN’s mission and work have been guided by the purposes and principles contained in the Charter.

In his remarks, the UN Special Representative highlighted three interlocking strategic areas of focus for the UN’s support in Somalia which align with the Federal Government’s plan: governance and state-building, security, and humanitarian and development needs.

Referring to the world body’s support for governance and state-building, the UN Special Representative said it went beyond assisting with Somali-led political processes and dialogue.

“It also involves our support for Somali state-building, such as development of local governance structures, support for key ministries… support for service delivery across a number of agencies within Somalia’s government,” Mr. Swan said.

In her remarks, Ms. Gbeho highlighted some of the recent collaboration between the UN and the Federal Government in relation to state-building efforts. She cited recent examples of work with the Ministry of Women and Human Rights Development. 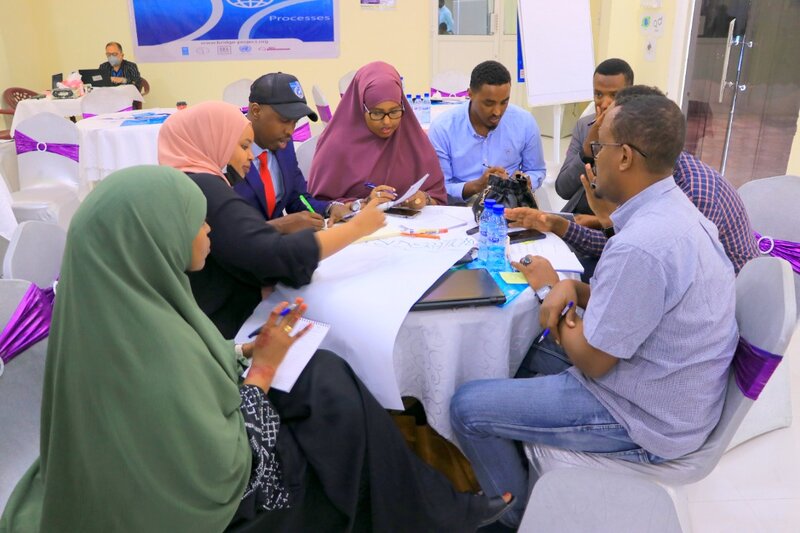 “The first of these programmes is the joint programme on human rights. This programme assists the government not only to build capacity – they have a priority around strengthening their protection frameworks – and also helps around inclusivity. The government is keen to see not only at the elite, central level, but also at the local level, assisting civil society and other organisations to understand what their rights are, in addition to allow them to be able to demand those rights,” Ms. Gbeho said.

“A second success story for the collaboration between the UN and the government, in support of their priorities, has been the women, peace and protection programme,” she added. “This programme is centred around supporting the women of Somalia to participate in the political process, to be part of the decision-making process, to have a seat at the table moving forward.”

The UN Deputy Special Representative also spoke of the support provided to Somalia’s justice and judicial sectors, the review of the provisional constitution and the strengthening of parliamentary processes, as well as long-term efforts to increase the parliamentary representation of women.

An effort to achieve a minimum of 30 per cent representation for women at the last electoral process did not succeed, with the percentage of parliamentary seats falling from 24 per cent to just over 20 per cent. Many of Somalia’s international partners have called for greater efforts to increase representation.

Referring to support for the security sector, the UN Special Representative highlighted the role of UNSOS, which works closely with the African Union Transition Mission in Somalia (ATMIS) and Somali security forces.

“But security, obviously, is more than just support for security forces – so we include in this category work on stabilisation for areas recovered from Al-Shabaab. We include work in support of government efforts on preventing and countering violent extremism, and support for the justice and corrections sectors,” he said.

Subsequently, in her remarks, Ms. Filipetto noted the close collaboration that UNSOS has with the Somali authorities. 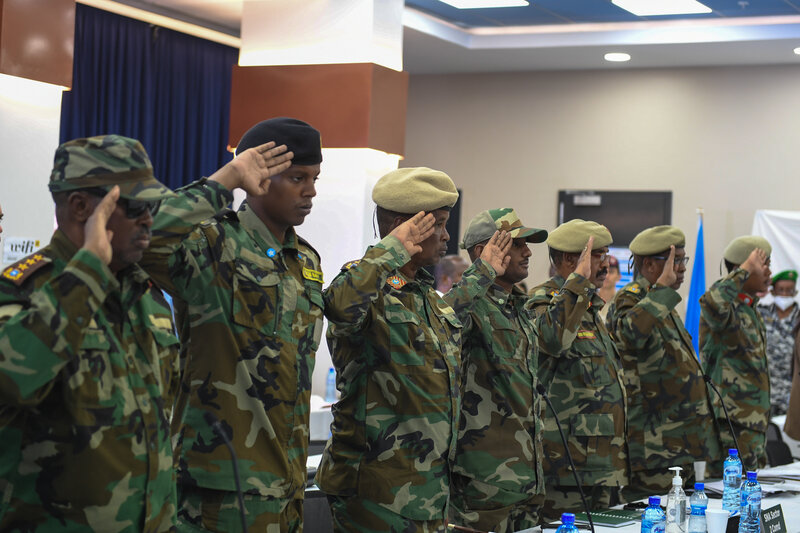 “We're here to support the vision of Somali people and the government for a peaceful, secure Somalia. But what we do, we actually provide, consistent with our mandate, non-lethal support to the African Union forces and the Somali security forces in the fight against terrorism in Somalia, and in their efforts to bring peace to this country,” Ms. Filipetto said.

Somalia’s security forces are currently engaged in military operations against the Al-Shabaab terrorist group in the Hiiraan region, located in the country’s centre. The Somali government has said it is determined to put an end to the threat posed by the militant group.

“Our current focus is to support the operations that are ongoing… and I really want to salute the bravery of all the Somali security forces, as well as the African Union and communities, for their bravery in this effort,” she added. “We know that the battle is fierce, and it takes a lot of courage.”

In addition to supporting some 13,900 Somali security forces and 19,000 ATMIS peacekeepers, UNSOS is supporting the reconfiguration of the African Union operation into a more agile and mobile force in response to a mandate from the UN Security Council.

On the third key area of support – addressing the humanitarian and longer-term development needs of Somalis – the UN Special Representative flagged the close interlinkage between the two strands, often referred to as the nexus of humanitarian, peace-building and development efforts.

“It reflects both the strong commitment to respond to immediate life-saving needs of Somalis, but also to work on developing their future capabilities, and the ability of the country to generate wealth to address its requirements under the Heavily Indebted Poor Countries (HIPC) Initiative to see improvements in health, education and other social sectors,” Mr. Swan noted in his remarks.

Speaking at the press conference, Mr. Daloum spoke of progress and challenges in Somalia’s development sphere, and underlined the UN’s commitment to supporting Somalia’s path to recovery and sustainable development. In particular, Somalia’s progress under the Heavily Indebted Poor Countries (HIPC) Initiative was highlighted. 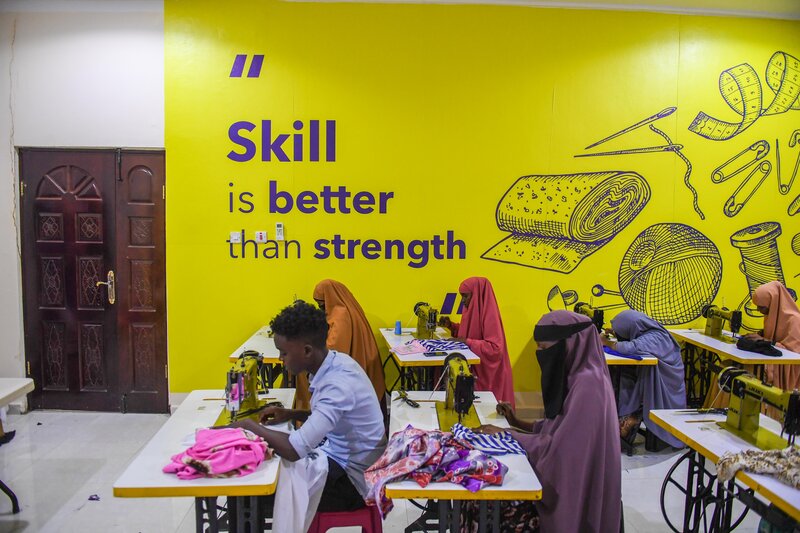 The HIPC Initiative is a facility launched in 1996 by the International Monetary Fund and World Bank, with the aim of ensuring that no poor country faces a debt burden it cannot manage. It brings together members of the international financial community, including multilateral organisations and governments, to work together to lower to sustainable levels the external debt burdens of the most heavily indebted poor countries, including Somalia.

In its scale of progress, countries need to reach the so-called ‘Decision Point’ first, a step at which a country’s eligibility for debt relief is confirmed and its relations with International Financial Institutions are fully normalised. Somalia reached that stage in March 2020. The second step is known as ‘Completion Point,’ at which a country must meet certain criteria, including reforms, after which it receives a full and irrevocable reduction in debt.

Recent comments made by IMF officials have indicated the progress made in the HIPC debt relief process, and that ‘Completion Point’ appears feasible in late 2023.

“Throughout the political transition over the past year, the Federal Government has continued to deliver on the ambitious HIPC reform agenda which it aims to conclude by the end of 2023. At this stage, we will see significant debt forgiveness by the international community,” Mr. Daloum noted.

In regard to Somalia’s humanitarian situation, the press conference heard about the dire state which millions of Somalis find themselves in due to the drought – the worst in 40 years, with four failed consecutive rainy seasons.

Decades of armed conflict, political instability, protracted displacement, as well as the devastating effects of climate-related shocks, particularly droughts and floods, have left millions of people at risk of starvation.

“We are unfortunately now bracing ourselves for a fifth failed rainy season and the time to act is now. Famine is projected in southern Somalia before the end of the year if humanitarian assistance is not urgently scaled up and sustained,” said Mr. Daloum. 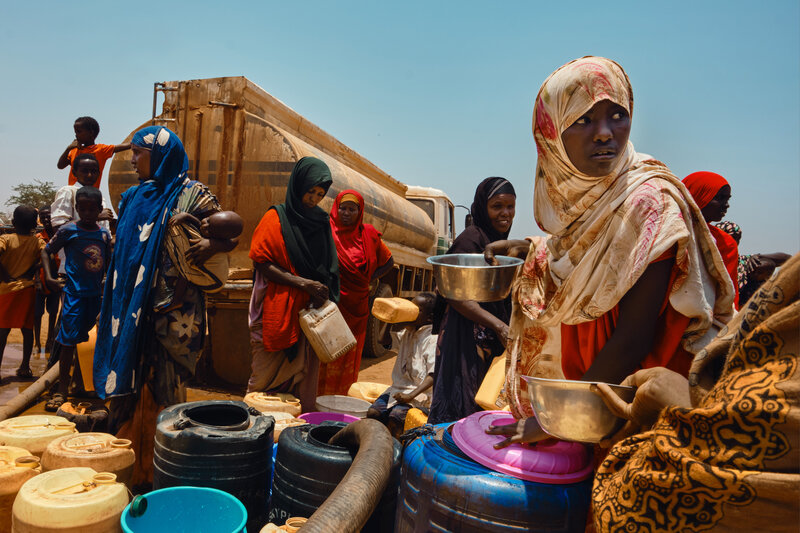 The number of Somalis in need rose from 3.2 million at the start of this year to 7.8 million now – nearly half of Somalia’s population. More than 1.1 million people are displaced.

The drought crisis has surpassed the initial humanitarian planning assumptions. This has led to the 2022 Humanitarian Response Plan recently being revised upwards by around $1.1 billion for what is left of 2022 in order to pre-empt famine in Somalia. Originally, some $1.46 billion had been sought for the plan in 2022 – with the recent revision, it now seeks $2.26 billion.

At the conclusion of his comments, Mr. Swan also spoke about the impending end to his assignment as the Secretary-General’s Special Representative and Head of the UN Assistance Mission in Somalia (UNSOM) – a post he took up more than three years ago.

He centred on encouraging signs he had encountered throughout his assignment. These included increased efforts and communication between the Federal Government and the leadership of the country’s five Federal Member States; increased attention to key policy and programme priorities across the country’s development agenda, including the HIPC Initiative; and the strong support flowing to Somalia’s recent initiatives against Al-Shabaab, including in stabilising areas freed of the terrorist group’s control. 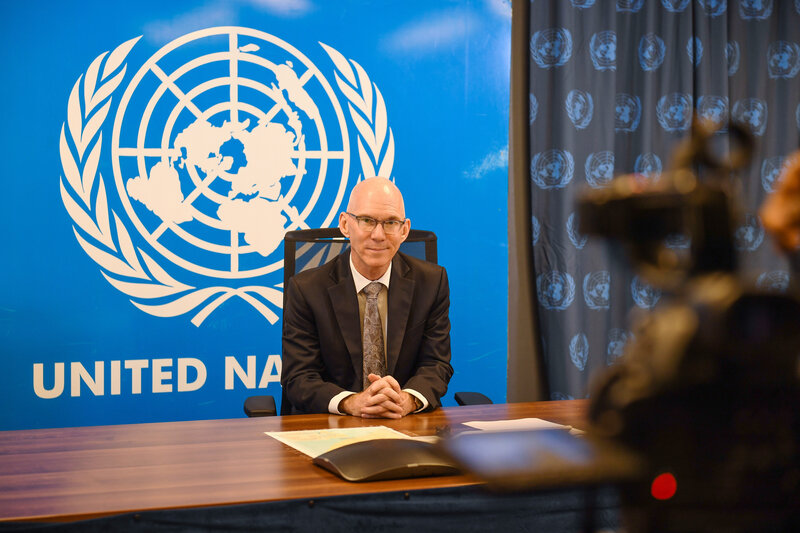 “I leave with a strong sense of hope for Somalia – part of the reason for my hopefulness as I look to the future of Somalia, despite all of the challenges that it faces, is [that] as someone who has worked in this country off-and-on for almost 30 years, to see the great progress of the quality of leaders and key officials, both at the central government and Federal Member State levels, growing capacity, growing effectiveness, growing skills, growing self-confidence,” Mr. Swan said.

“And I really am myself increasingly confident,” he continued, “that this leadership team, young Somalis and already-experienced Somalis, will continue to make progress in this country for its people, and the United Nations remains committed to supporting those efforts.”

Click here for a full transcript of the UN Day press conference.