Abdirahman Abdi Ahmed: “Plight of internally displaced persons and refugees is not new to me, I lived through it”

Jubaland’s Minister of Humanitarian Affairs and Disaster Management on his path to help his fellow countrymen.

Kismayo – Abdirahman Abdi Ahmed’s path to helping his fellow Somalis mired in humanitarian crises in southern Somalia’s Jubaland was a circuitous one.

It was also a journey that left him with a keen awareness of some of the challenges that his countrymen and women face in such circumstances ― displacement, despair and doubt.

“The plight of internally displaced persons (IDPs) and refugees is not new to me, I lived through it, and I understand what it means as I had spent most of my life outside my country,” he says.

Mr. Ahmed was born in 1988 to a family of eight in Afmadow, a town of about 200,000 people located in the Lower Juba region of the Federal Member State of Jubaland, southern Somalia. His upbringing changed dramatically when Somalia’s civil war erupted three years afterwards.

The conflict forced his family to flee over the border to northern Kenya, where it settled in the town of Garissa and tried to build a new life for its members. 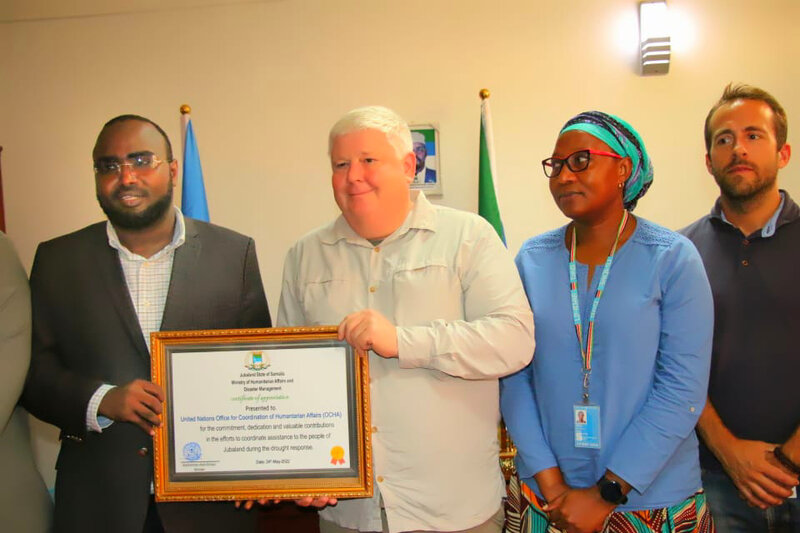 In 2010 he was awarded a scholarship to study at Cavendish University, in Zambia, from where he graduated with a degree in economics in 2015.

His experiences in Zambia added to his understanding of humanitarian affairs and the impact of helping people in need. While studying, he spent two years working as a monitoring and evaluation assistant at Zambia’s Ministry of Community Development on a maternal and child health project supported by the United Nations High Commissioner for Refugees (UNHCR). This involved travelling and interacting with residents of the Maheba refugee camp in Zambia, which at the time housed some tens of thousands of refugees from countries such as Congo, Rwanda, Burundi, Sudan and even Somalia.

After graduation, he was employed by Zambia’s Office of the Commissioner for Refugees in the Ministry of Home Affairs in Zambia, as an advocate for refugees and asylum seekers in the country.

“I used to spend time with refugees in camps, listened to their stories and tried to keep their spirits up, so they didn’t lose hope and looked to good days ahead,” the 34-year-old says. “When I told them how I ended up there, they felt they were not alone.” 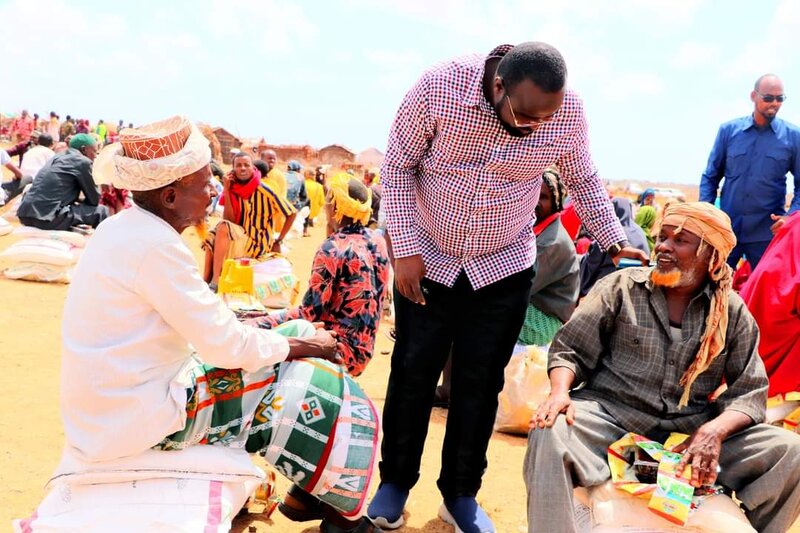 But the pull of Somalia was strong, and he returned to his homeland in late 2016, making his way to the interim capital of Jubaland, Kismayo.

He landed a job as a director-general in the Federal Member State’s Ministry of Interior, where he was charged with handling its federal relations and reconciliation efforts. Despite the new responsibilities, he remained engaged in humanitarian matters and was in charge of managing and coordinating the resettlements of people returning from Kenya’s Dadaab camp, the world’s third-largest complex hosting refugees and asylum seekers. He was also able to attend to the needs of internally displaced people (IDPs) and returnees in Kismayo, where there are currently some hundreds of people who are integrated and share day-to-day life with the host communities. 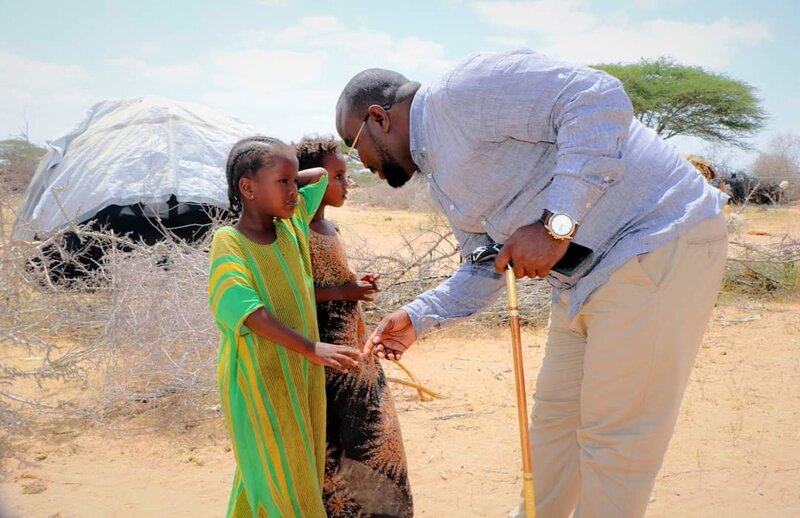 In his director’s role, he was responsible for implementing the ‘Midnimo’ (Unity) programme – which was initially supported by the International Organization for Migration (IOM) and UN-Habitat. Midnimo is a cluster of humanitarian, development and peacebuilding projects providing durable solutions to the IDPs and host communities. The programme was piloted in Jubaland, and South West States, and later expanded to other states.

In early 2019, Mr. Ahmed was transferred to Jubaland’s Ministry of Youth and Sports, again as a director-general. Still, the needs of the region’s displaced people remained an important focus for him and even overlapped with his work at the ministry.

“Today, as anyone can see, nearly 500 people are receiving vocational training and have access to sports there, including IDPs and returnees from the Dadaab refugee camp,” Mr. Ahmed says. “The fact is that trained, young people contribute to job creation opportunities, allowing youth to earn a living legally.”

In May 2021, Mr. Ahmed’s efforts and passion were recognised ― he was appointed Jubaland’s Minister of Humanitarian Affairs and Disaster Management. The Federal Member State’s three regions currently host almost a million displaced people due to the ongoing conflict with the Al-Shabaab terrorist group, the severe drought currently gripping Somalia and, more specifically for Jubaland, periodic floodings, which are often a consequence of drought-induced dry soil. 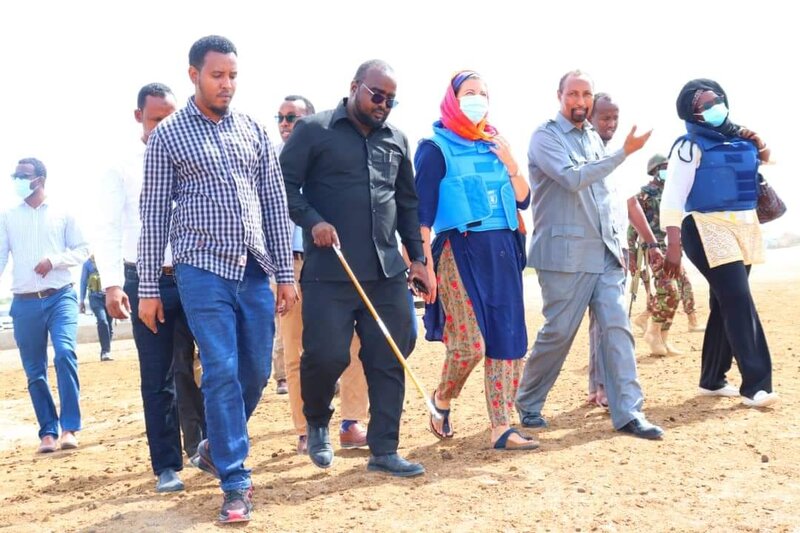 “[In 2018], I personally rescued a mother and her six children and relocated them to a safer place - to a house built for IDPs and returnees. Those people had been displaced by drought and conflict; then they fell victim to floods,” he says, recalling flash floods which that displaced hundreds of IDPs in the Farjano Dalhis area in Kismayo district.

“With the needed resources, community engagement and accountability, the suffering of displaced people can be lessened. We can do something about the status quo that for the moment is either flood or drought or famine in Somalia,” he says.

Mr. Ahmed firmly believes that the response to Somalia’s humanitarian crises needs to include good governance and durable solutions, with the latter integrating measures such as water catchment areas and the construction of gabions on the riverbanks to avert the recurring floods. 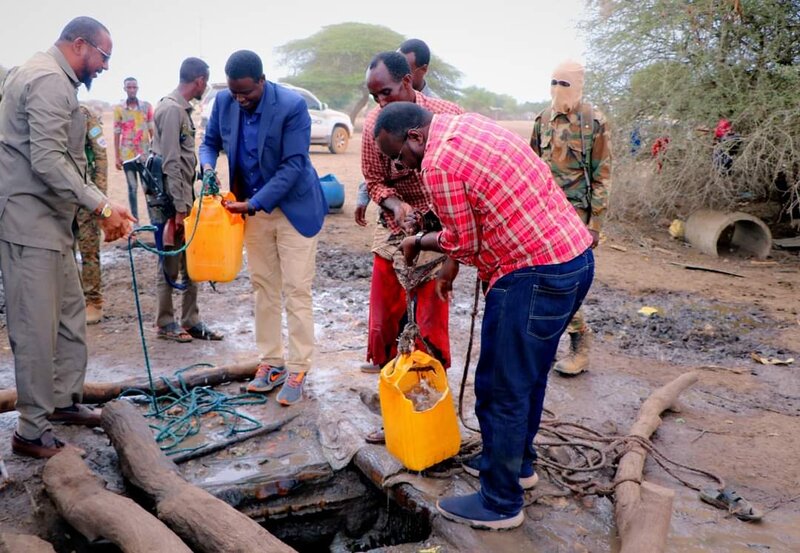 “Somalia is endowed with natural resources, and it needs good governance that creates a peaceful environment for Somalis to achieve their full potential and focus on long-term solutions mitigating the impact of the repeated natural crises,” he says. “As long as there is no concrete long-term strategy, the trend will likely continue.”

The Federal Government of Somalia has developed and adopted the National Durable Solutions Strategy 2020-2024 for Somalia to holistically address the root causes of displacement and its consequences. The strategy’s longer-term intent is to reduce and mitigate the adverse impacts of displacement created by recurrent natural disasters and related links with conflicts and governance.

In July this year, Mr. Ahmed’s career trajectory took a new path with his appointment as Jubaland’s Minister of Planning. But despite the new focus, he says the humanitarian needs of his fellow citizens will remain a priority as long as he is at the decision table.

“While I am in charge of the Planning Ministry, I will work towards developing a strategy that will lead to durable solutions for the people in need,” he says. 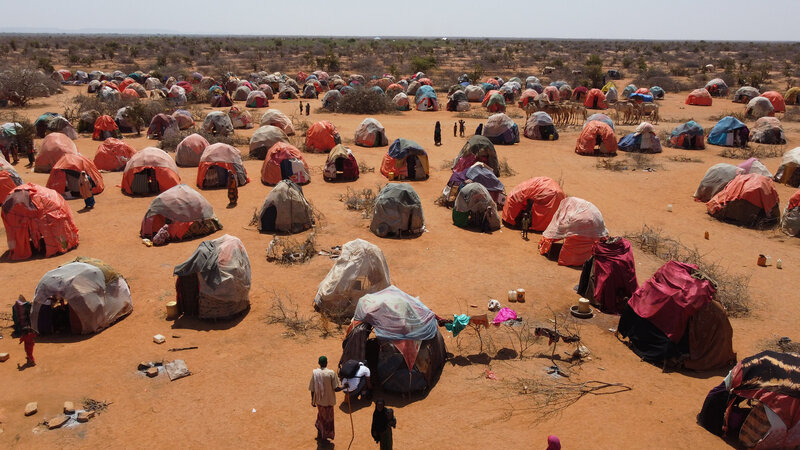 In his remarks to the UN Security Council on Wednesday, 7 September, the UN Secretary-General’s Special Representative for Somalia, James Swan, called for all parties in Somalia to facilitate humanitarian access, and for donors to increase funding.